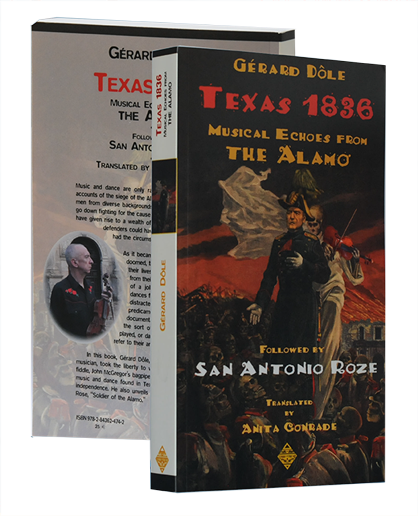 This comprehensive and abundantly illustrated study by Gérard Dôle, edited and translated by Anita Conrade, is devoted to music and dance in Texas at the time of its war for independence. Mr. Dôle sifted through a large number of documents, old and new, in conducting his research for the book. Because a majority of the Anglo-Celtic soldiers who made up the Alamo garrison had come to Texas from homesteads in other parts of the United States, the author begins with a study of dancing as a social activity in North America in the 18th and early 19th centuries. Next, he surveys the musical instruments, songs, and dance melodies the Texians favored at the time, referring when necessary to the music popular in the lands they had left behind: England, Scotland, Ireland, Germany, and even Denmark. Mr. Dôle goes on to cite the tunes sung and danced during the siege of the Alamo, both by its defenders (some of whom were inside the fort with their families or their black slaves) and by its attackers (who had attracted a motley crowd of camp followers). He mentions the martial music (fifes and drums) on both sides. Finally, Mr. Dôle explores Davy Crockett’s fiddle and John McGregor’s bagpipes. According to the granddaughter of one of the few survivors of the massacre, their duets were other-worldly. One can imagine the two men striking up a lively jig or fling in order to distract their companions-in-arms, doomed to certain death. For a brief instant, fiddle and pipes were a spirited match for the ominous notes of General Santa Anna’s trumpets.

In the second part of the book, “San Antonio Roze,” the author cites fifty documents as proof that the Napoleonic officer Louis Roze (1785-1851) has wrongly been identified as the mysterious Moses Rose, the Alamo deserter who claimed to have served in Bonaparte’s Grande Armée. In truth, Lieutenant Louis Roze never crossed the Atlantic, so he never set foot in Texas or on any other American territory. After an illustrious and blameless military career, he died in France, as the records show. 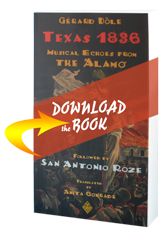